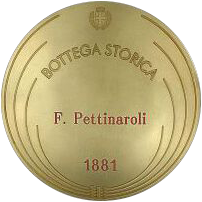 This historic store, known for years as the “Bottega Storica”, was founded in 1881 by Francesco Pettinaroli when he moved from Lago di Orta to Milan. Right from the start, it took the form of a stationery store with annexed printing and binding shop. It quickly became known to the Milanese, who were living through times of intense industrial development and perhaps had been waiting just for such a store to open. And it did so in grand style, right next to the renowned Galleria Vittorio Emanuele, the city’s modern, monumental new gathering spot, completed just four years earlier.

The fine paper, precise and elegant workmanship, and high-class papercraft products were a hit with the city’s inhabitants, who have continued to flock to Pettinaroli throughout its 135 years in the business. They come to have the printing work done for their most important events, all printed using the most highly refined techniques: births, first communions, weddings. Here they witness the creation of fine-crafted invitations, personal or business letterhead, and business cards of all types.

In 1883, two years after it opened, the store moved from Via San Raffaele to Via Santa Radegonda. It would remain there until 1959, when it relocated to the nearby Piazza San Fedele at the corner of Via Marino, never losing its view of the symbol of Milan: the “Little Madonna” a top the highest spire of the cathedral, whence the saying “...more than a hundred years in the shadow of the Madonnina”.

With the Cathedral on one side and the temple of opera on the other, the printing shop accompanied La Scala in all its triumphs: in 1887 Giuseppe Verdi once again thrilled the world with the opening night of Otello, the orchestra pit was graced with the talents of a budding cellist, Arturo Toscanini, and Giacomo Puccini, already an honorary milanese for some years, was preparing to experience his first acclaim at the world’s most famous opera house.

The year 2017 will mark a fresh new chapter in the life of the historic store; scarcely concealing a certain wistfulness, Pettinaroli shall move out of the Cathedral’s grand shadow. The “trauma” shall be short-lived however, since its new home is the artistic heart of the city, just a few hundred metres further on: the quintessentially elegant Via Brera. This culturally vibrant neighbourhood is home to the Brera Art Gallery, the Brera Academy of Fine Arts and the Braidense National Library, as well as to discerning artists and intellectuals. Pettinaroli thus once again affirms its unflagging desire to showcase its artistic and artisanal traditions.

We are now in our fourth generation and the fact that the store has always been in the family has ensured that its essence remains unaltered: everyone has added something of his own while continuing the work of his predecessors and cultivating his own personal passions. One dedicated great attention to developments in typography, one recruited gifted artisans to produce exclusive articles, another hunted up small yet uncompromising paper manufacturers, while yet another developed his tastes and passion for historical prints. Maps from every part of the world, town views, and the “pearl” of mountain prints make our store a central reference point for all aficionados of the enchanting world of prints, and Francesco has long made a name for himself as one of Italy’s leading experts, taking part in specialized shows all over Europe.

A priority through all these years has always been the search for, or production of, fine quality, exclusively Italian-made articles and the valorization of the Italian tradition of artisanry, something of which we are particularly proud.

Today it is Francesco, flanked by highly competent specialists, at the helm, investing the same passion and enthusiasm that has distinguished this store for over one hundred and thirty years.